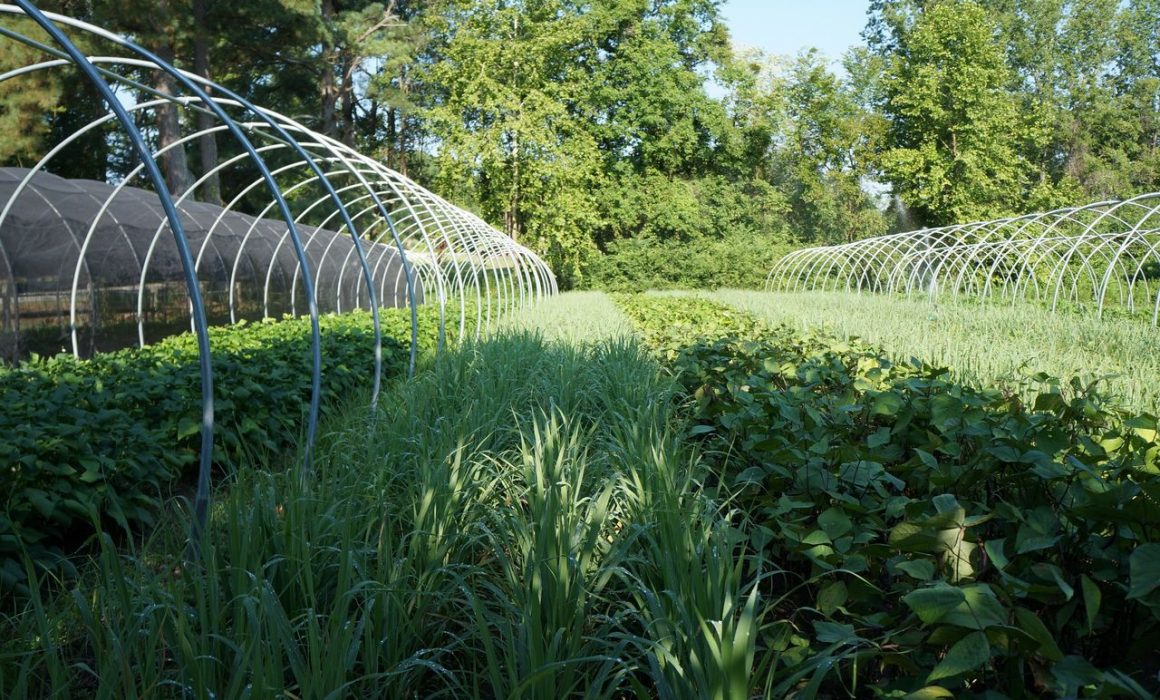 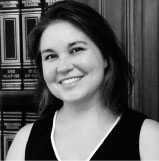 This article was initially featured in chathamlifeandstyle.com.

In true North Carolina fashion, the temperature and humidity have already begun to climb by the time I arrive at Steve and AnLe’s farm, even though it is barely past 9am. Their small family business, Blue Sky Farms, sits just outside of the Raleigh area. Situated on both sides of a shady windy country road, a sense of stillness and peace emanates from the property. Having been on a major highway moments prior, it’s as if I’ve stepped into another quiet and misty world. Warehouses, cabins and other structures sit parallel to the parking area, and I can see from that vantage that each corner of the land has its own particular job to do; all of it is being utilized to its full potential. From the fields and greenhouses, to the worm compost piles and shady mushroom growing area in the woods, the farm is both a creation in nature as much as it is a reaction to it. 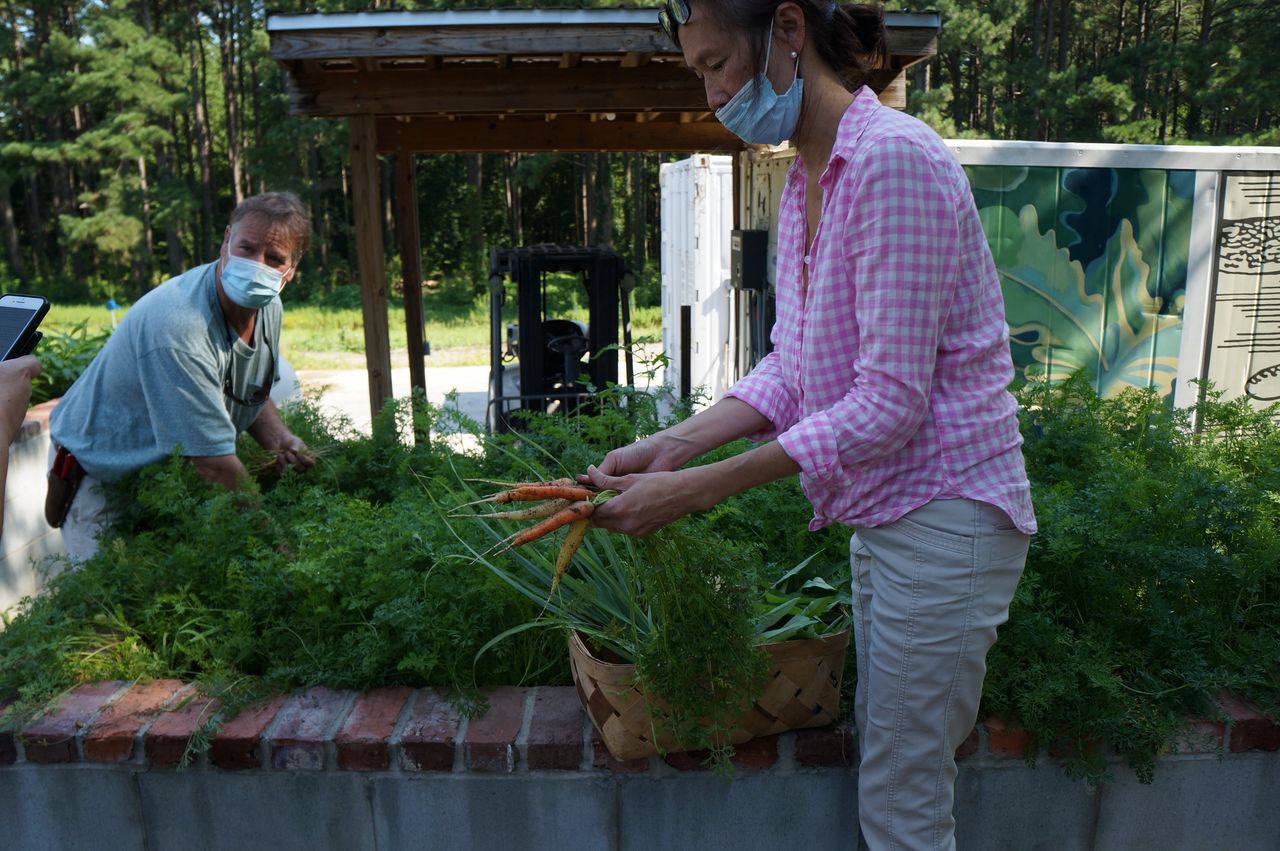 In the early 1990s, Blue Sky farm was founded by a young, newly married Steve and AnLe. They moved onto old family land and decided to farm it for a living, a feat that was both daunting and exciting to the couple. They started small, and lived onsite in a little cabin with a loft. As time went on they continued to acquire land and diversify their crops. Blue Sky is an organic farm, which to Steve and AnLe specifically means to simply “work with nature instead of against.” Organic farms are on the rise here in North Carolina, as they are all over the country, and it is obvious why. Farming organically is better for the health of the environment, the plants produced and animals raised, as well as for the farmers that grow our food. It is a difficult, albeit rewarding way to farm. Consumers are also happily buying more organic. The U.S. organic market grew 6.3% to $52.5 billion as non-food sales increased nearly 11%. Steve explains that, to him, “farming is a partnership.” He goes with what “will maximize space and production like using directional exposure and taking sight analysis of what nature is doing. It means making an assessment of drainage issues and of the way light hits the ground each season.”

Since we live in a society that is driven by economic growth and burgeoning production, it is no surprise that monocrop or duo crop farms have been the norm here since the later half of the 20th century. At that time, the Farm Act was expanded to provide reimbursement of any crops sold under a dollar amount set by congress. While this policy was initially tantamount to the livelihood of farmers, overtime it has caused an imbalance in the production of crops. Many farmers are now encouraged to plant only one or two crops, rather than produce a variety. In addition to an overabundance of certain crops, mono and duo crop farms create ecological issues over time. Monocropping unfortunately goes hand in hand with pesticide and fertilizer overuse, soil depletion and it even threatens biodiversity. 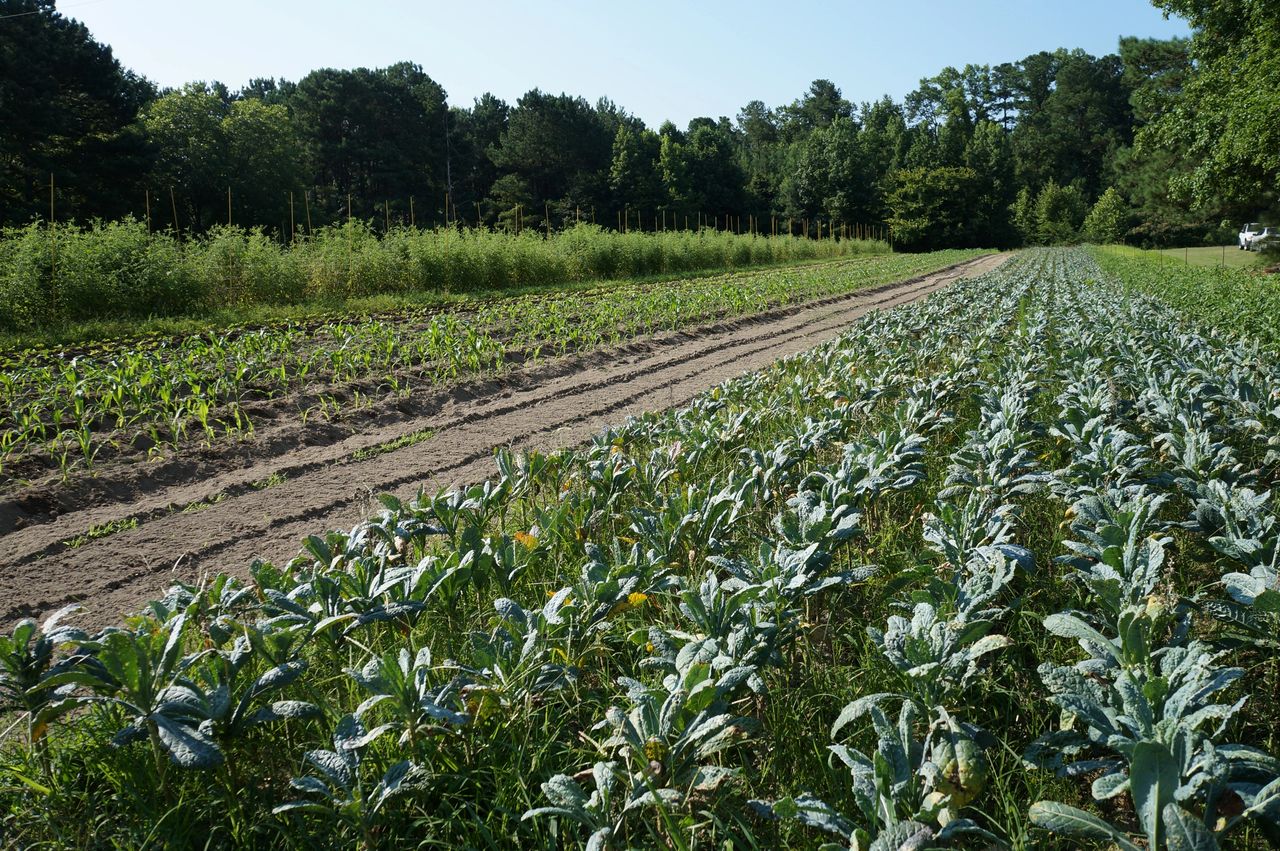 The good news is that little by little, small family farms like Steve and AnLe’s are changing the food production landscape around us. By using regenerative farming practices, farmers can be more flexible with their crops, growing what works well in the soil and in the season at hand. The same plants they harvest are also the same plants that restore the soil without heavy fertilizers and pesticides. While organic farming can be labor intensive (AnLe relayed that they do more weeding than harvesting) Blue Sky Farms uses alternative ways to control pests and weeds. Instead of chemical pesticides, Blue Sky uses ecologically friendly methods, such as attracting the “right” bugs through pollinator gardens, and by planting herbs in between rows of crops. Alternating rows like this avoids crop annihilation by pests because the herbs deter bugs, but also it gives the farmers time to deal with a pest organically by isolating the crop. If they see evidence of any insects, fungus or bacteria ruining a row of veggies they can deal with the row before the issue moves into other areas. 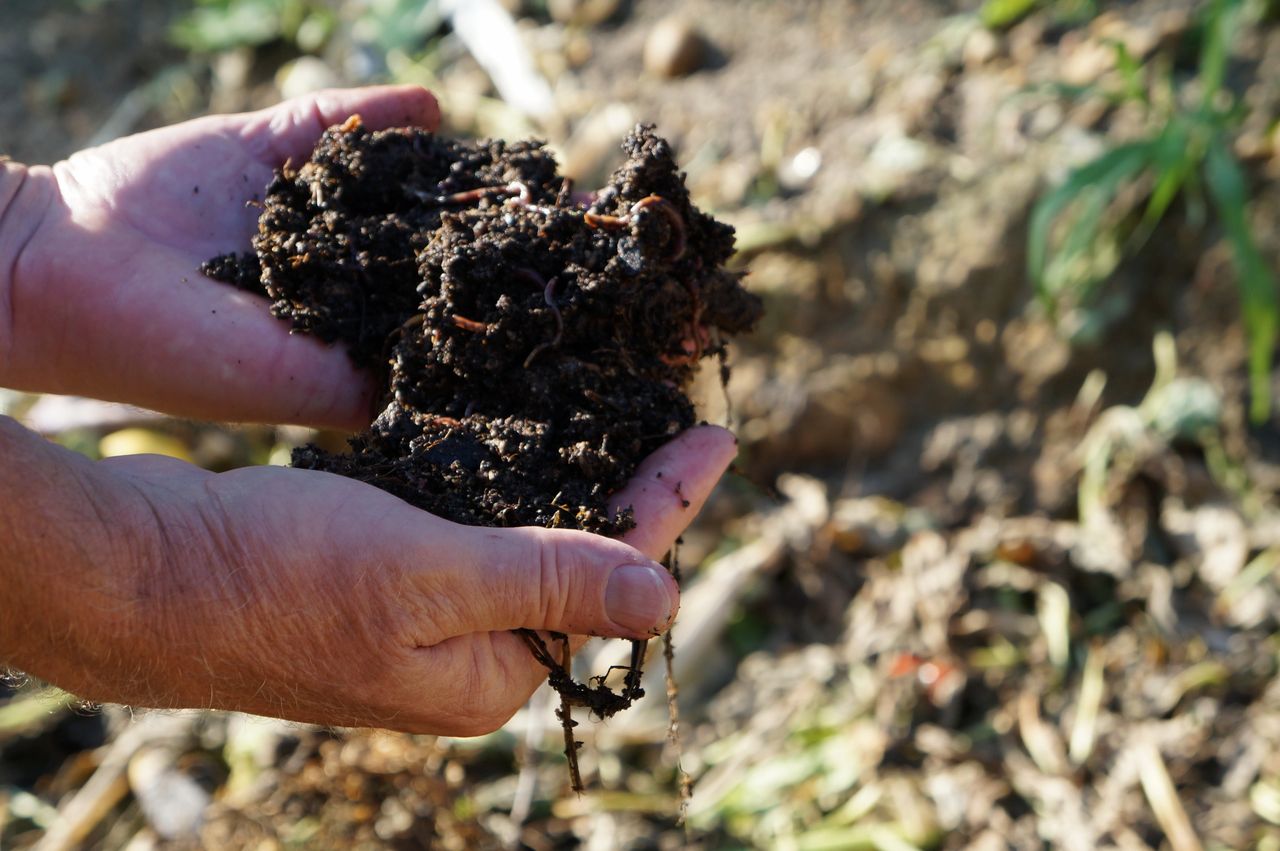 Farming the way Steve and AnLe do is not always the most lucrative way to produce food. “As a farmer, you’re lucky if you break even,” explained Steve. To counter costs and raise his bottom line, Steve realized in the 90s that it would be beneficial to create a distribution network with other farmers. At the time, this was a novel idea for a small farm, so he created the blueprint for this endeavor on his own. Today, Blue Farm’s partnerships with other small food producers subsidize the farm, and increases the farm’s bottom line.

Unfortunately, as with many cherished businesses in our area, COVID-19 has put a damper on those hard-earned profits. Before the pandemic, Blue Sky Farms primarily provided food for restaurants in the area. With March came the temporary closings, that by summer became permanent for too many restaurants. These closings had a ripple effect on farmers in the Triangle, as many were small enterprises themselves with little room for failure. To attempt to mitigate losses, Blue Sky once again needed to pivot resources to keep going.

Today, in addition to restaurants, Steve and AnLe have started a robust Community Supported Agriculture (CSA) box venture that is available to the public each week. The list of crops that Blue Sky produces is extensive and changes with each season. At the moment, they have beans, corn, herbs, garlic, squash and more for sale from their own farm. They pair their organic offerings with other local farmers’ foods in their boxes, like apples, strawberries and kiwi, as well as lettuce, potatoes and eggs. Steve and AnLe, in keeping with their hospitable and warm nature, often greet customers individually at the farm during pick up. 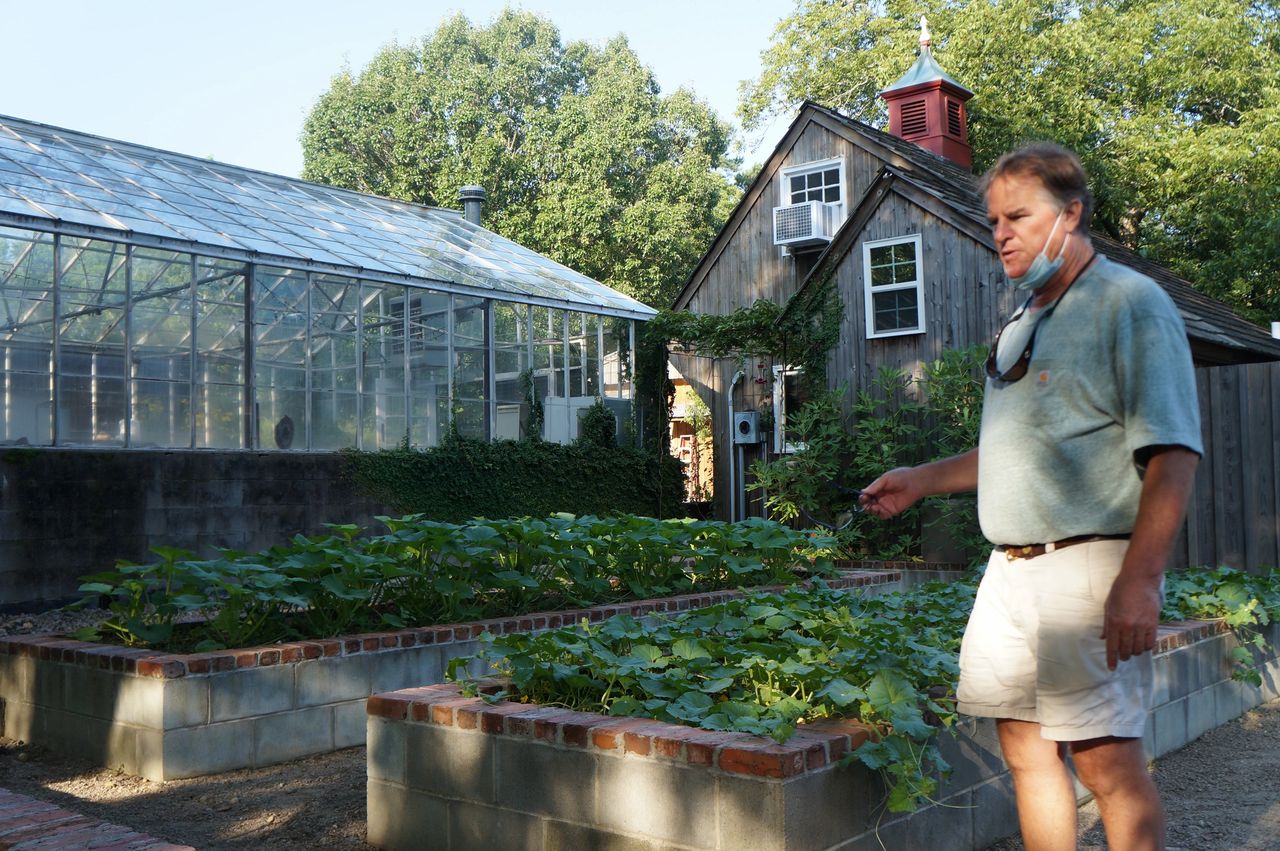 At the end of my tour, Steve leads me through a small cabin that, unluckily enough, was completed just before the pandemic hit. The structure was remodeled into a full kitchen and sits adjacent to a beautiful arbor and outdoor eating space. Long tables align the patio space in old-world Tuscan fashion. This is the realization of yet another of Steve’s dreams, where he and AnLe plan to host farm-to-table events right on their property, alongside their rows of vibrant plants.

We would like to express our thanks to Cecilia and her appreciation and support of local Artisans in our area.
Thank you Cecilia from all of us at Blue Sky Farms — your support is invaluable!