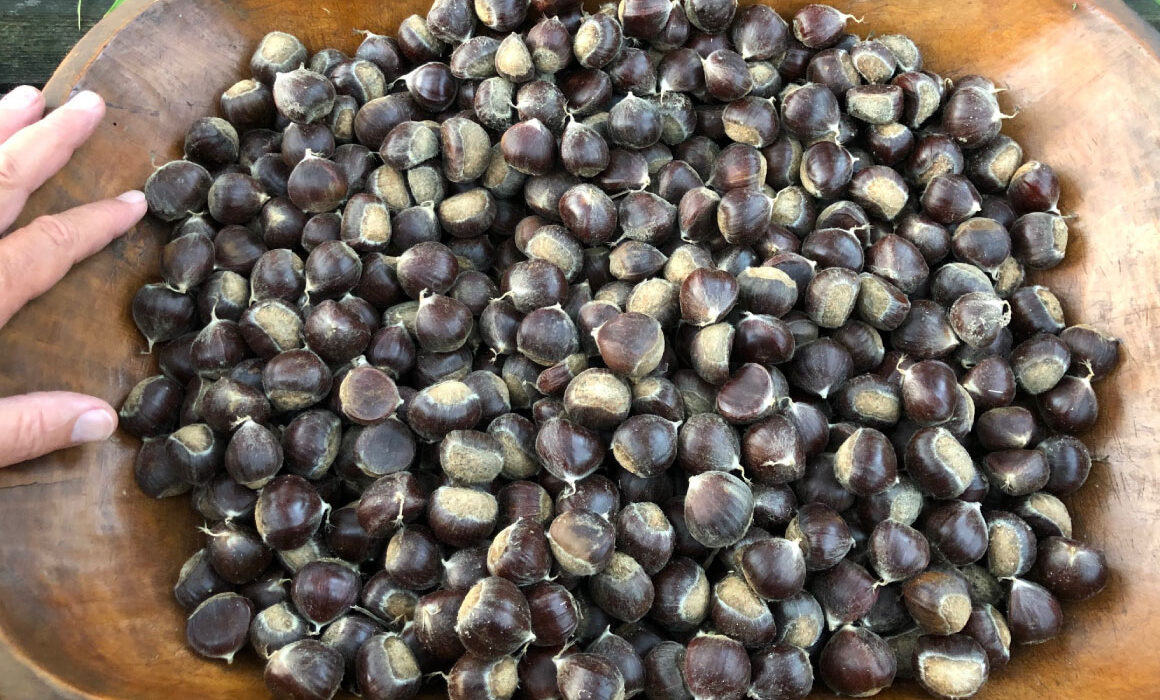 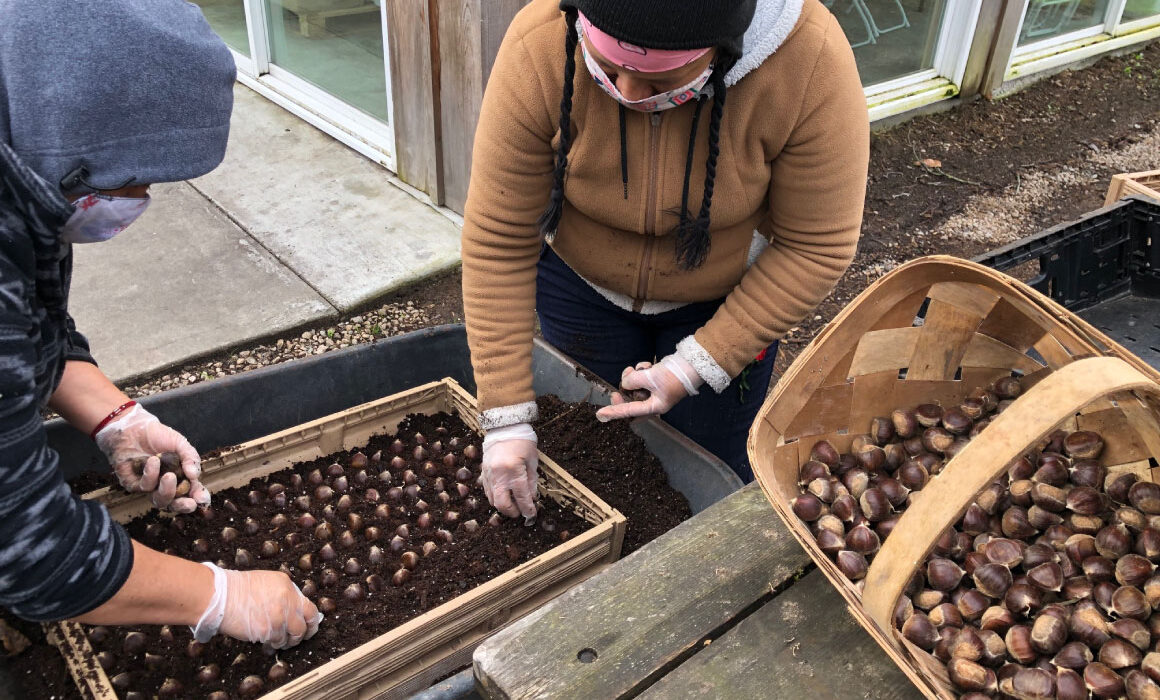 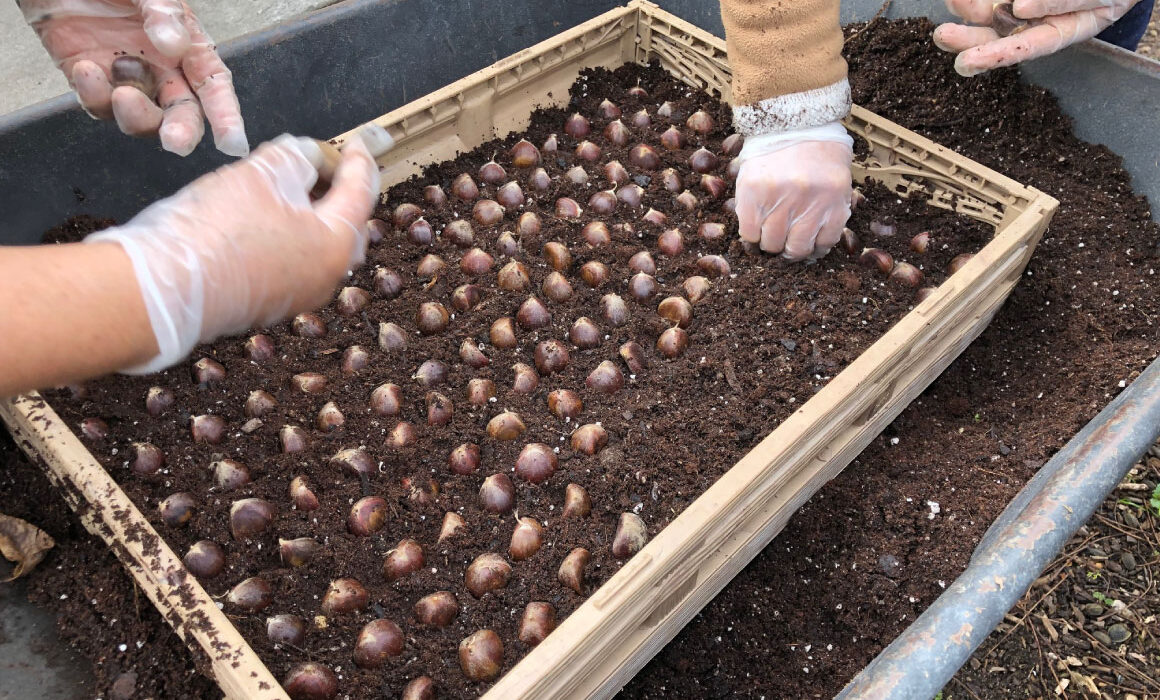 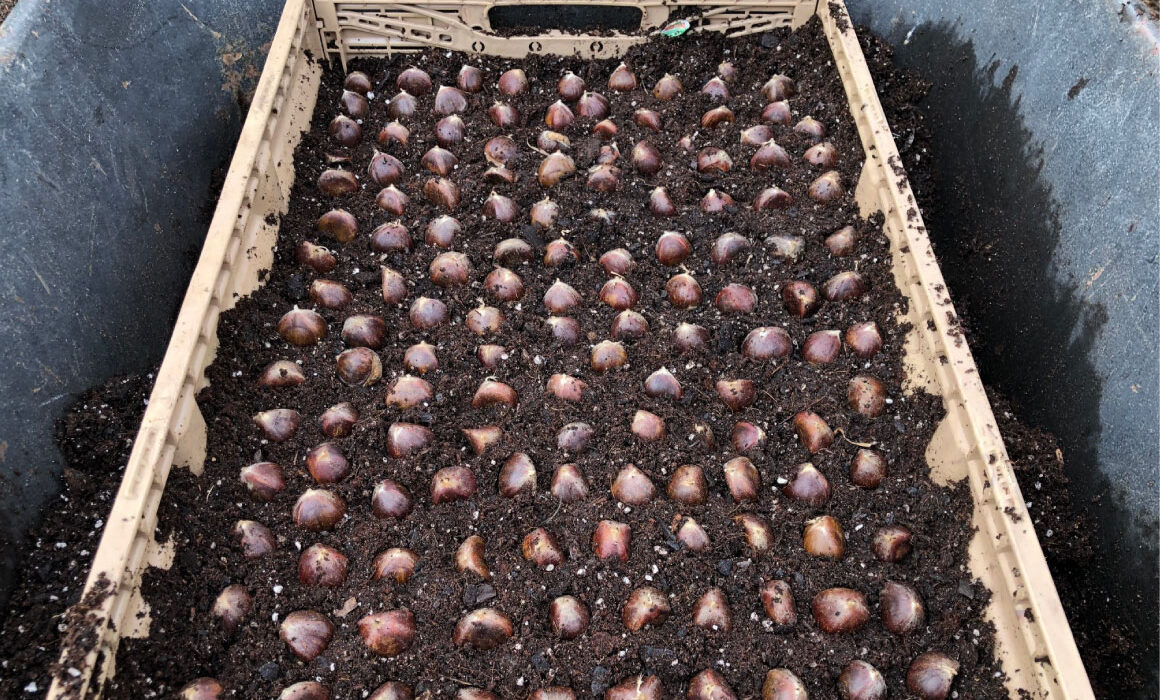 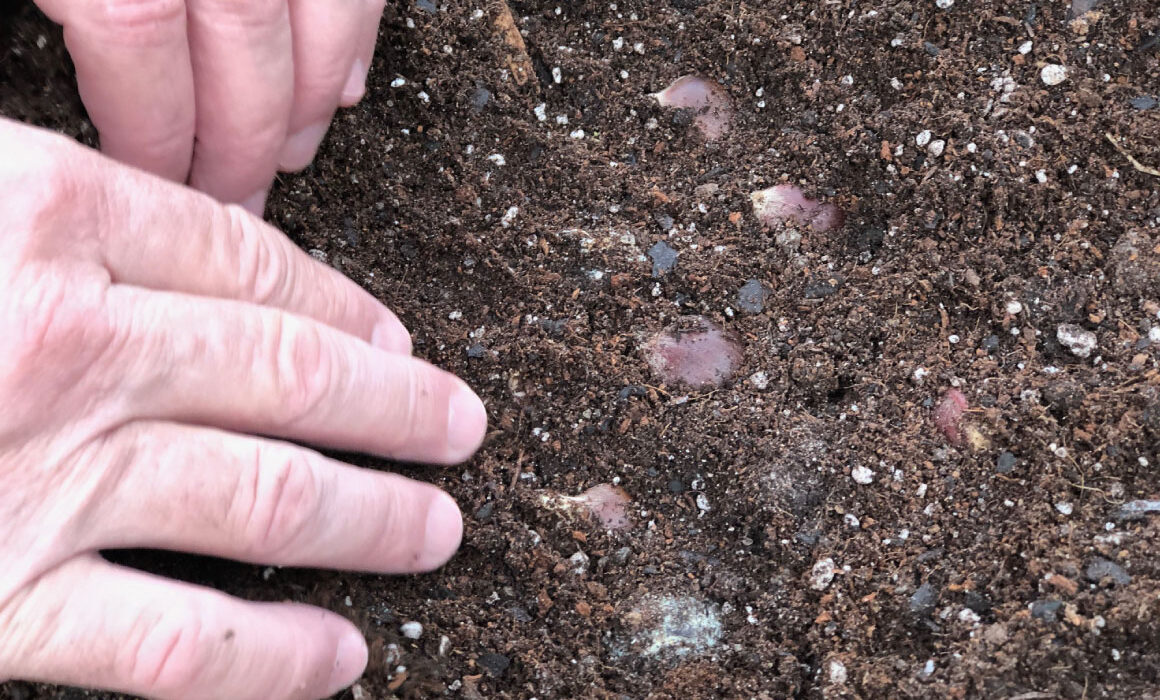 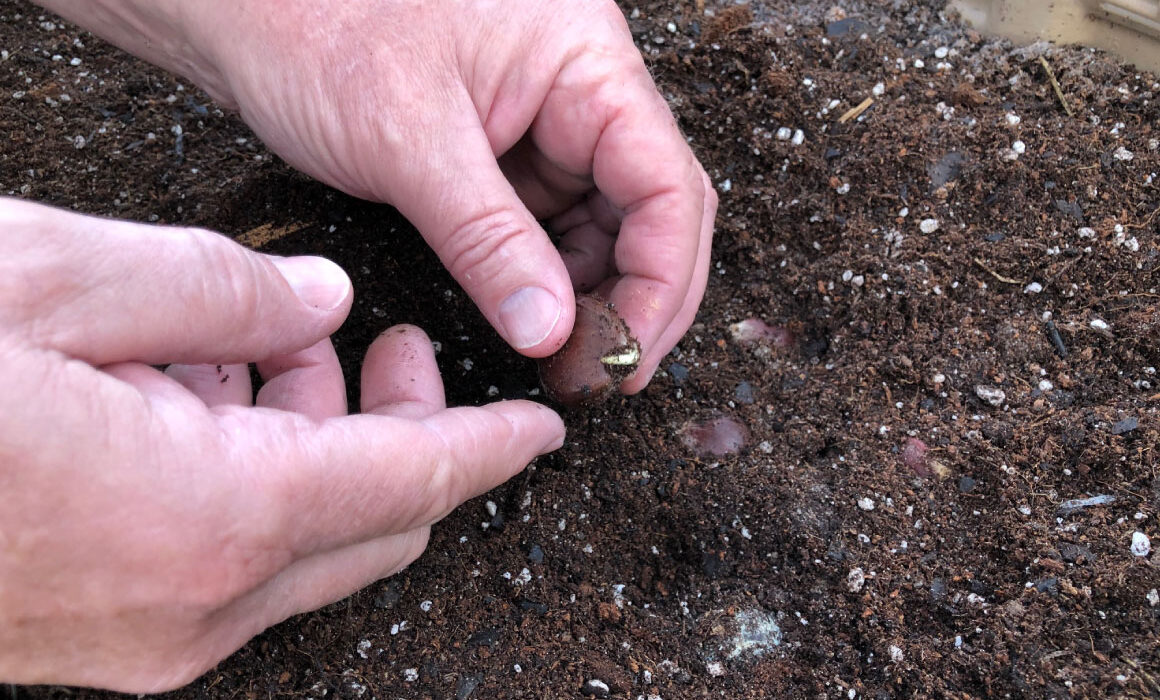 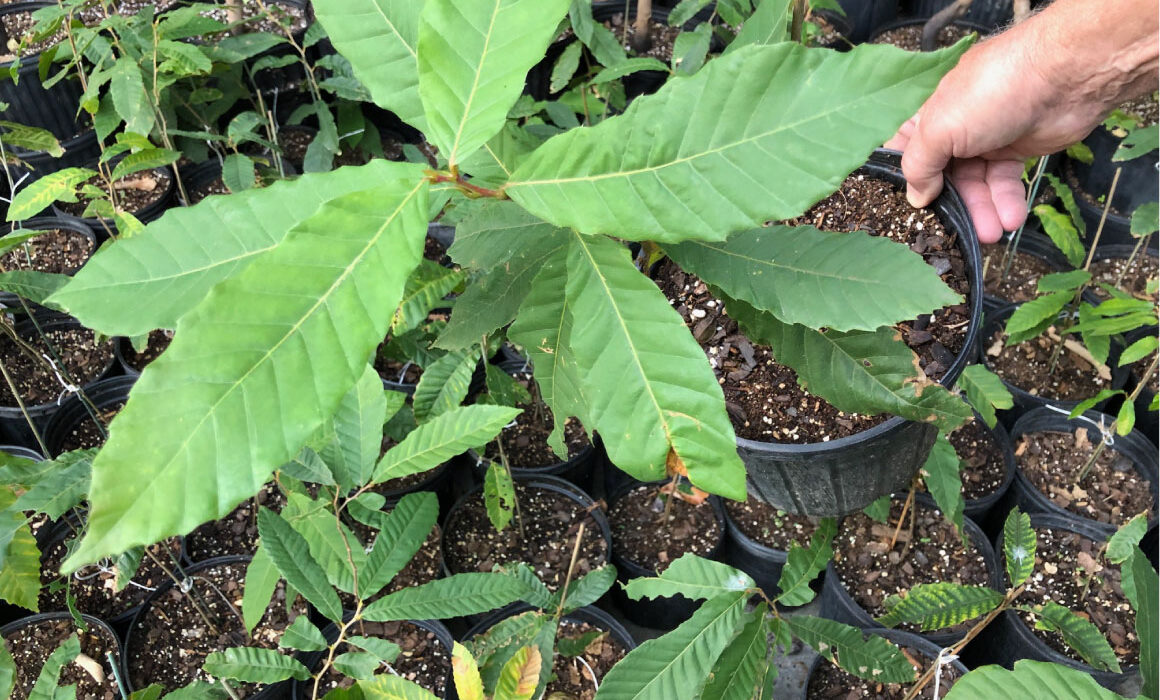 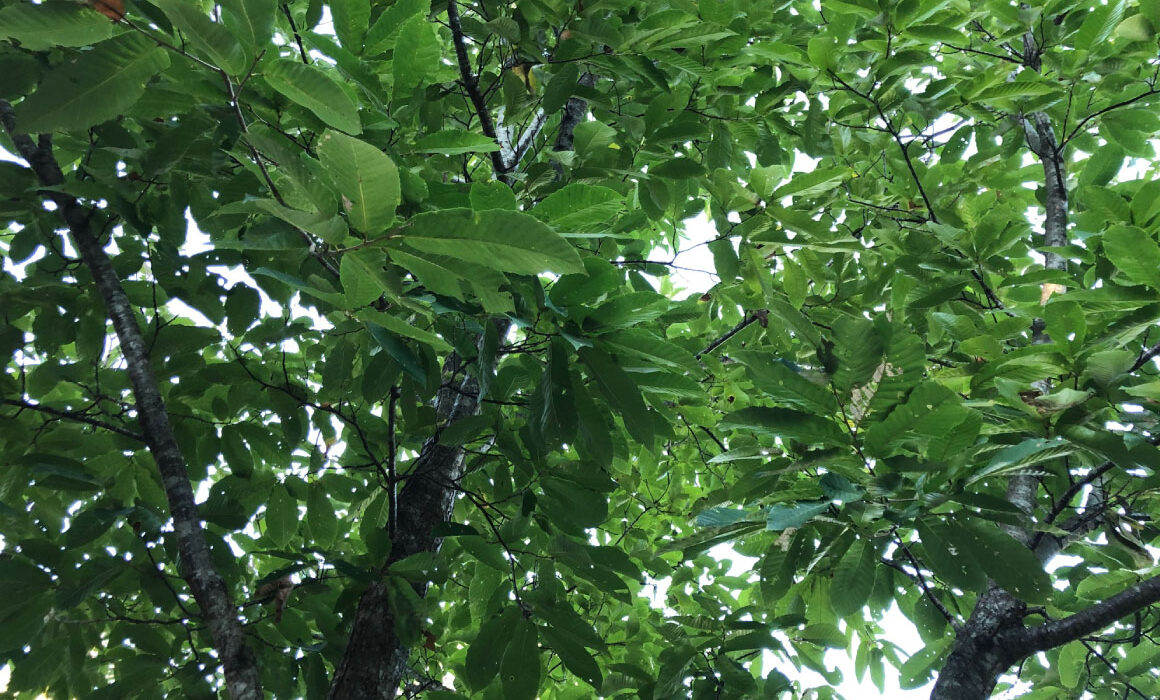 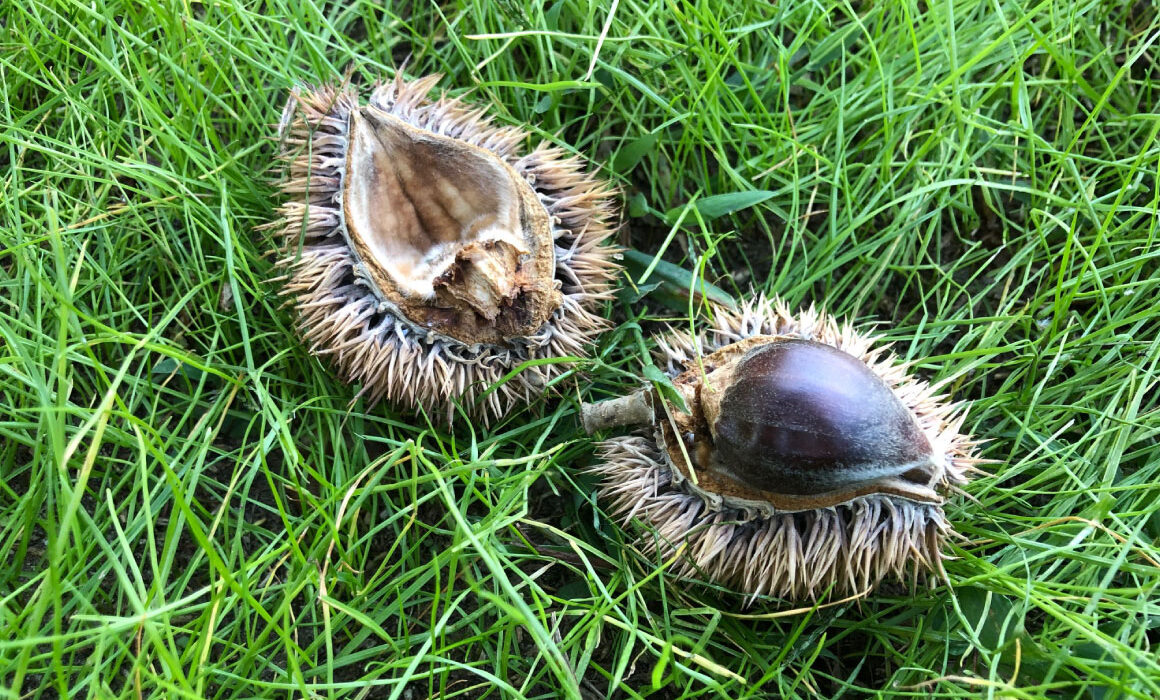 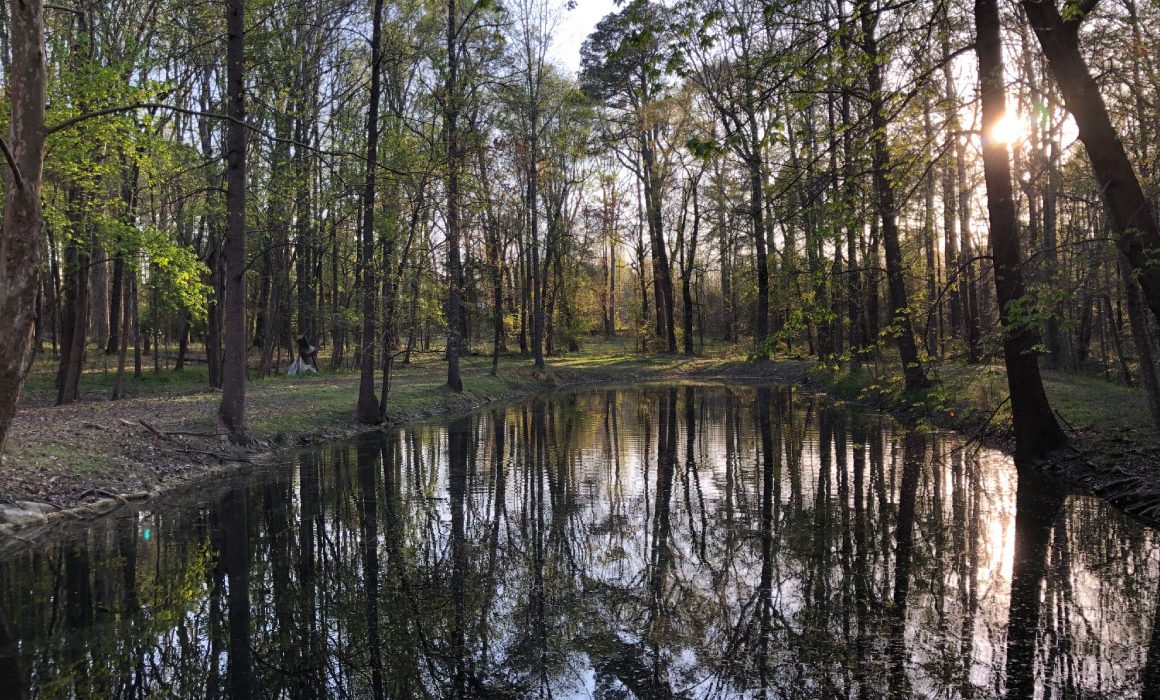 In late October the leaves begin to lose chlorophyll and their true colors show through. You can start to hear the rap – tap – tap of acorns and other nuts dropping from tree branches — bouncing off the metal roofs of our, not long to be shaded, outbuildings. There are an abundant number of nut trees on the farm. Such as the many varieties of oaks along with hickory and pecan trees. But there is one tree we are trying to reestablish that at one time filled the western and Piedmont woodland of North Carolina. The chestnut. Unlike the Longleaf Pine which covered most of the southeast and was decimated for its wood, tar, pitch and turpentine. The chestnut succumbed to a devastating blight; like no other tree in America. It was, at one time, king of the North Carolina forest.

5 or 6 years ago, my cousin, Joel Whitley, who lives on the other side of the farm, gave me a small chestnut seedling from some chestnuts he had gathered off a forest floor in West Virginia. That same seedling has become a young tree — bearing an abundance of chestnuts for the past two years. Chestnuts fall from a prickly husk that surrounds the fruit providing protection from squirrels, opossum, raccoon, deer, and such. We just started gathering these chestnuts up for future trees in October of 2020.

We began by taking chestnuts freed from their husk, and then placing the chestnuts in a shallow 4 inch crate and covering them with loam. The crate was then placed on a rack in the walk — in cooler so it could go through the stratification process. I would have rather left the crate outdoors for the winter, but inevitably the squirrels would have come upon it running away with all my chestnuts. So we replicate the chilling process in a more controlled environment. This is called “cold seed stratification”. Sometime in late winter, I uncovered some of the crate’s loam, and discovered the chestnuts had begun sprouting. At that point, we gently removed what has sprouted and potted them up in 3 inch pots, allowing what was viable to emerge. Once the new seedlings appeared, the seedlings were moved up to 1 gallon pots where they were able to develop a strong root system. They are now ready to be planted out around the farm in late fall — early winter.

Last count, our first batch of seedlings is around 100 potential trees. Not all will make it, but hopefully most will. And maybe one day, they will establish themselves inside the woodland of our farm. 40 years ago I use to whimsically refer to this farm as “Chestnut Oaks”. Funny, it doesn’t seem so whimsical after all.